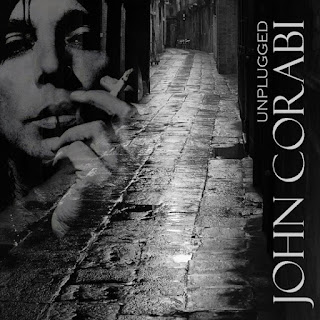 
The long awaited solo debut from former The Scream, Mötley Crüe and Union frontman, John Corabi, has FINALLY arrived and while it is a departure from what you would expect as a debut solo album, it does not disappoint.  The fact that John has issued an acoustic album is not a shock to anyone who has followed his career but to issue an acoustic album as your debut solo effort is a ballsy move in my opinion.  That being said, John is one of a few artists that could pull off such a feat after the career fronting the bands that he has.


Over the years, it seems there is no middle ground when it comes to people's opinions of John Corabi, either you love him or hate him.  I've known several people who refused to listen to the album he did with Mötley Crüe because it wasn't Vince Neil yet when I put the album on and didn't tell them who it was, they loved it! Also, there are a large number of people who won't give him a fair shot because he fronted Mötley Crüe from 1992-1997.  Too bad because they're missing out on one of the best lyricists and singers in music.


A few years ago, John moved to Nashville and has been focused on writing songs for others as well as this "Unplugged" album.  The album features seven songs from his previous bands, five new songs and a bonus interview track.  This album isn't just "a man and his guitar", it features a full band in a stripped down setting. There aren't any electric instruments or drums, just acoustic guitars and bass, hand percussion and shakers & three and four part harmonies. I cannot heap enough praise onto his band for their contributions on the album. The production, mixing and mastering are stellar!  Their harmonies are just insane!!!
TRACK-BY-TRACK REVIEW:


Love (I Don’t Need It Anymore) - The album gets off to an uptempo start with a favorite among Union fans & my favorite Union track, EVER.  This cut was originally released on Union's debut album in 1998.  It stays fairly true to the original with the exception being it is acoustic.  The hand percussion is a tad bit funky, diggin' the vibe it brings to it.  The riff remains as addictive as ever & D.A. gives Bruce Kulick on run for his money on the solo without overplaying!


If I Never Get To Say Goodbye - A heartfelt ballad about making sure you always tell the ones you love that you love them because you never know what will happen next.  It is a new track co-written with Nashville songsmith Gary Hannan of "Tequila Makes Her Clothes Fall Off" fame.  Sparse percussion and the harmony vocals really make this song stand out.


Are You Waiting? - Diehard fans of John Corabi have known of this track for over 20 years as it was originally demoed for his pre-The Scream band "Angora".  The track was originally produced by Steve Vai back in the late 1980's.  This re-arrangement and production sounds much better than those multi-generational demos I've been listening to for years.  I've also noticed that certain parts sound eerily similar to the song "Loveshine" that John originally recorded with Mötley Crüe back in 1993 and has re-recorded for this album.  Similarities aside, another great song.


Crash - I must say that the title is catchy as hell!  Something about it resonates with me!  Moving on, lyrically, this tune is a tearjerker.  This is also a new track.  The production and mix on this song really shines and allows the individual parts to blend together perfectly yet they have room to breathe.  Many bands these days record acoustic songs and they sound like a mess.


Everything’s Alright - This was originally released on Union's "The Blue Room" album in 2000.  It is an homage to one of John's biggest influences, The Beatles.  Pay attention to the lyrics and harmonies, it is obvious.


Father, Mother, Son - Originally released in 1991 on the debut album for his band "The Scream".  This song is probably the most talked about, if not most loved song of John's career.  If you are a parent, the lyrics will strike a nerve.  This version stays true to the original acoustic version that was issued as a b-side on the single but the background harmonies bring it to a whole new level.  Dare I say, gospel-esque?  You decide.


Hooligan's Holiday - We have arrived to the song that John is most known for even if the people hearing it don't realize who it is.  It was the lead single from John's time in Mötley Crüe.  Those familiar with the original will have their jaw drop when they hear this version.  Originally, this cut is as heavy and (gasp!) grungy as possible.  Here, besides being acoustic, it has a real delta blues feel to it. Former Union bandmate, Bruce Kulick provides the lead guitar and nailed Mick Mars parts.  I couldn't have ever imagined this song sounding like this but it works and works very well!!


If I Had A Dime - Another new song and the first video released for this project.  It is co-written with bandmate and producer, D.A. Karkos.  A lot has been said about John's past songwriting partners and bandmates like Nikki Sixx and Bruce Kulick but from his songwriting contribution here, his musicianship and production throughout, I believe John has met his "musical soulmate" in D.A.


Loveshine - Another Mötley Crüe era song.  It stays true to the spirit of the original with a few embellishments added.


Man In The Moon - The second 'The Scream' era tune re-worked for this album is also a fan favorite amongst Corabi fans.  This tune also features his Union bandmate, Bruce Kulick on lead guitars.  It cracks me up how I'm so used to the original arrangement and electrified version that after the verse I kept anticipating the tempo to change and go full throttle but it stays back in the pocket.  I really digg this version.  GREAT JOB!


Open Your Eyes - Another new song that is actually ten years old as it was originally recorded for a project John had in 2002 called "Zen Lunatic" and was put up on the recording studios website for download.  I definitely hear the influence that Led Zeppelin and Aerosmith have had on John especially vocally and lyrically.


I Never Loved Her Anyway - The final song and another "The Scream" era track has always been a personal favorite of mine due to the attitude of the lyrics and how he delivers them.  It is a bit funkier and more up-tempo than the original and has a bit more aggression added to the delivery of the vocals.  I wonder if his failed relationships inspired the extra piss and vinegar?  Ya think?


Bonus Interview Track - John shares some stories, news and you have a chance to get a feel for his sense of humor which has always come through in his music.


In concluding and like I said before, this album is a ballsy move for a debut solo album.  It DOES NOT disappoint in any fashion.  I like the fact that John had Bruce contribute to non-Union songs.  It would have been easy to have him re-record his parts but instead they went left of center and had him play on cuts from John's previous bands, The Scream and Mötley Crüe.  Long time fans of John Corabi will appreciate this album and hopefully, with enough publicity and some radio airplay, he will reach a whole new audience.
He has begun work on an electric solo album with this band but in the meantime, this album should hold fans over til its release sometime (hopefully!) in 2013.  There are songs that will fit whatever mood you are in, there is some mighty tasty guitar playing on it from John & D.A., the percussion adds to the atmosphere and John is singing better than ever.  I can't say enough about the musicianship, production, mixing and mastering on this album.  It is perfect without being stripped of the talent and soul that 90% of music released today lacks!!!  Finally, I'd highly recommend lowering the lights, firing up some candles or incense, pouring an adult beverage of your choice, sitting back and "Let It Flow".
Please visit John's Official Website or his Facebook page.
Purchase this album from Rat Pak Records or iTunes
Listen to the full-length tracks for "Hooligan's Holiday", "Loveshine", "Are You Waiting?" and "I Never Loved Her Anyway" at Rat Pak Records SoundCloud Page